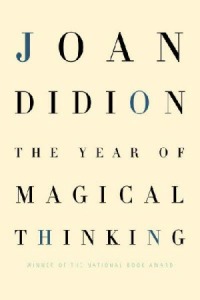 I finished this incredibly honest and poignant book by Joan Didion yesterday. The title is what lured me in: The Year of Magical Thinking.

I know from the research for my book project, that “magical thinking” is a psychological term often associated with the bereaved. It’s especially common for a child to encounter this concept in a negative context. For instance, if a boy wishes his sister would leave him alone, and she suddenly dies, he might think he caused it. That’s magical thinking.

But it can be a positive coping mechanism as well. If that same boy misses his sister and carries a note from her in his pocket to keep her close, that’s magical thinking, too.

Adults can just as easily fall under this spell because, at its core, magical thinking is a magnification of our natural proclivity to find patterns, particularly in stressful and confusing times, like death.

I know all of this logically, and yet I couldn’t help but get goose bumps yesterday when I read the following passages in Joan’s book about the loss of her husband—just as I was struggling with my ongoing fears about this blog and my own book project.

You see, my fear is that, rather than seeing this endeavor as a way to bring joy and comfort to people, as I intend, it will simply make people uncomfortable. That people will wonder why I can’t “get over it.”

To which Joan acknowledged:

[Geoffrey Gorer] observed, the contemporary trend was “to treat mourning as morbid self-indulgence, and to give social admiration to the bereaved who hide their grief so fully that no one would guess anything had happened.”

I can’t and won’t pretend like nothing happened. Sue’s death ripped me open at the seams, but it’s also putting me back together as a better woman.

Then Joan got to the heart of the “getting over it” issue:

People in grief think a great deal about self-pity. We worry it, dread it, scourge our thinking for signs of it. We fear that our actions will reveal the condition tellingly described as “dwelling on it” … Visible mourning reminds us of death, which is construed as unnatural, a failure to manage the situation … “I never saw a wild thing / sorry for itself,” D. H. Lawrence wrote. This may be what Lawrence (or we) would prefer to believe about wild things, but consider those dolphins who refuse to eat after the death of a mate. Consider those geese who search for the lost mate until they themselves become disoriented and die … The connections that made up their life—both the deep connections and the apparently (until they are broken) insignificant connections—have all vanished. John and I were married for forty years. I could not count the times during the average day when something would come up that I needed to tell him. This impulse did not end with his death. What ended was the possibility of response … “I think I am beginning to understand why grief feels like suspense,” C.S. Lewis wrote after the death of his wife. “It comes from the frustration of so many impulses that had become habitual. Thought after thought, feeling after feeling, action after action, had H. for their object. Now their target is gone. I keep on through habit and fitting an arrow to the string, then I remember and have to lay the bow down.”

For me, rather than laying the bow down, I’ve taken my arrow and aimed it in the direction of this project instead. And it may be magical thinking, but I can’t help but feel that Sue guided my arm.

Thank you, Joan, for giving me a sense of sanity and camaraderie in these “mudgy” times, as you called them. And thank you, readers, for your kind encouragement. Your rallying cry of love for Sue ignites my heart and my will.

Have you experienced magical thinking? Did you heed it or ignore it? Did it help you or hinder you?