A few days ago I posted about Joan Didion’s book, The Year of Magical Thinking. Continuing in the spirit of “magical thinking” (and the bizarre of symphonic resonance of my post last week), here are three “magical” things that recently came to my attention, echoing of Joan and Sue:

2. Conversation Through a Closet Door

Last weekend I was listening to NPR and heard that Joan recently released a new book, Blue Nights.

I can’t vouch for it, but The Year of Magical Thinking was moving and well written, so if you’re in the market for an insightful memoire about coping with a loss, you can’t go wrong with either.

Perhaps there’s someone on your gift list who would appreciate the thought, too?

Do you have any recommendations for insightful books about mourning, inspiration, or navigating life’s challenging transitions? If so, please share them with us.

2. Conversation Through a Closet Door

Joan wrote the following in her Magical Thinking book, explaining one of the many unexpected quirks of grief that she experienced after her husband’s death. “The voice on my answering machine is still John’s,” she wrote. “If I needed to retape it now I would do so with a sense of betrayal.”

This immediately called to mind my odd fixation with the closet door in the nursery.

During her visit to meet our 3-week-old Szaba last year, Sue took the door’s alphabet magnets and arranged them as you see here.

Every time I see it, I think about Sue rocking Szaba in that room, staring at those magnets and puzzling out what message she wanted to form with their letters.

I silently ask her, “What would you have wanted to spell if you had more letters, Sue? Did you intend for that message to stay with Szaba just until your next visit? Or were you leaving behind a more permanent assurance, knowing you only had a few more weeks to live? Did you give that message as much thought as I’m assigning to it now, or was it something you just did on a whim?”

“One day someone will move one of those letters, Sue. It will happen, and it will break my heart.”

As long as they stay just like that, I muse, then Sue and I are still having this silent conversation. It’s just perennially paused.

Joan also wrote, “Survivors look back and see omens, messages they missed.” This makes me think of the necklace that Sue gave me.

It was about this time last year. Sue was visiting to spend time with her granddaughter, and we were sitting down to dinner. She had a red box for me, a jewelry box. Before placing it in my hands, she recited a lovely little speech, the gist of which she had told me before, maybe half a dozen times. But it was different this time. She was more urgent and insistent about the message, holding back tears.

“I’ll never forget the first time I met you. It was at the lake cabin. At the end of the trip, as you and Ryan got in the car to go, it was the first time Ryan was leaving me that I didn’t feel a mother’s worry about leaving her son. I knew he had you, and I knew he’d be alright. Thank you for always being there for him and loving him unconditionally. Thank you for giving him a daughter and giving me a granddaughter. Here is something to always remind you how much I love you for these things and so much more.” 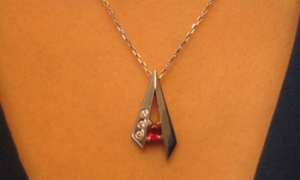 Then she gave me this ruby necklace.

She had it specially designed for me. She hadn’t even planned on having it look like an “A” for “Angela,” but there was the form of the letter, clear as day. She was delighted by that, and I was incredible moved by the token and the thought.

The magical thinking part is wondering if she intended it to be her parting gift to me. It’s the omen I recall now that I think I missed then, as Joan would say.

The magical thinking part is also researching the meaning of gemstones while trying to find the perfect gift for a friend and finding this about rubies:

“It is said that the power of Ruby is in its encouragement to follow your dreams and your bliss, helping you to change your world. Ruby will bring light to the dark places in one’s life, bring a spark of awareness to those places where you might still need work, and give you the opportunity to clear that path.”

Omen or not, I’m keeping that necklace—and its messages—close to heart.