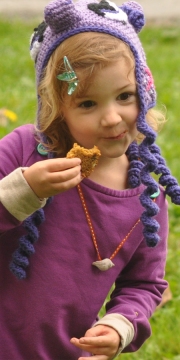 I may be reserved and nice, but I’m also surprisingly stubborn. As in, so stubborn that my husband once joked I could have a C-section without anesthetics, if I got it in my head to do so.

Stubborn plus parenting doesn’t always mix, let me tell ya.

It’s been a bumpy road, but I’m slowing learning the art of knowing when to give up—and that it’s not always a bad thing.

For those of you who’ve been following my escapades for a while now (if so—thank you!), you know that my daughter’s Halloween costumes have been kind of a big deal.

It started when Szaba was a mere four months old. My mother-in-law, Sue, was coming to visit. Her cancer had taken a turn for the worse, and I wanted something to cheer us both up. So I asked Sue to come up with Szaba’s costume.

I only had one rule: something aspirational, no princess girly nonsense.

Sue came through in spades with an incredible Amelia Earhart costume.

There was only one problem. She set the bar high. Really high. And it wasn’t her fault—well, besides the awesomeness of the costume.

It was Sue’s last visit to our house and the last (and only) tradition her and my daughter ever enjoyed together. So of course, every year after, it was a big deal. It evolved beyond tradition. It was an emotional monument.

As you might guess, emotional monuments are heavy. (Pun unfortunately intended.)

The next two years I stuck with the “inspiring women in history” theme. First, there was Marie Curie and then, in a nod to the election year, Elizabeth Cady Stanton. Last year, we veered a bit to create what I thought would be the first in a trio of “strong females in literature” costumes: Carmen. 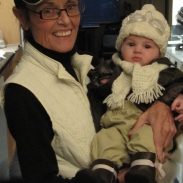 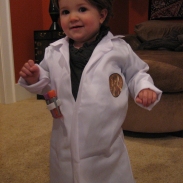 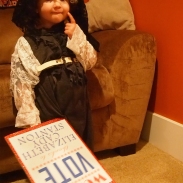 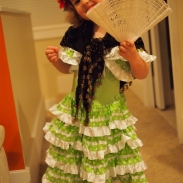 Year to year, did the houses we visited have any idea who she was? Not really. Was I proud of my efforts? Of course. But most importantly, did my daughter enjoy it? Kinda sorta… ?

Which brings us to this year. I tried my best to figure out a costume that could strike the balance between my idealized vision (and maybe even superstition?) and my daughter’s happiness.

But you know what won out? My daughter’s happiness. She’s going to be Twilight Sparkle, her favorite My Little Pony.

You know what lost? The stubbornness of a tradition rooted in grief. After four years, I’m thinking that’s probably a good thing.

So this is me giving up, peeling back one determined finger at a time…

But motherhood has taught me—through spit ups, blowouts, impromptu adventures, and exhausted morning TV cuddlefests—”giving up” can sometimes be a good thing. Grief has taught me that, too. And so has happiness.

“Where you stumble, there lies your treasure.”
~Joseph Campbell

5 thoughts on “Knowing When to Give Up”

Follow My Castle Heart on Instagram
How I've felt for the past few months. But the light is shining through the trees. Can you feel it, too?
Ahhhhhhhh.❄🙏
Lessons from Act 3 of the Groundhog Day movie:
My new favorite poem, by my 6yo son. "Mom/super, awesome/loving, playing/Angela."💗🤗
After nearly a year of virtual schooling now, screen-free time is a treasured luxury.💗
As we head into almost a year of quarantining now (and counting), this idea of "Wintering" by author Katherin May feels particularly poignant.❄💙
And now, your moment of Zen.
"Covid creative." That's a term the kids and I talked about a lot over the past year. Case in point: Seattle's virtual NY fireworks display last night. I have to say, I hope we will learn from and build upon the humbling creativity that rose up from humanity in 2020.
Happy 5th Birthday to The Denim Jungle! Five years ago today I received the first copy for proofing. It was magical to see Sue's dream made reality in my hands. It felt like holding my heart outside of my body.💙📚🎉 @preciousbeast