For our honeymoon—well, technically our second one, but that’s another story—Ryan and I went to Thailand.

It was a completely foreign experience outside of either of our comfort zones, and yet it remains one of our most memorable travel experience to this day. I’d even say it was one of our favorites because of that.

At the end of the trip, we had a blitzkrieg day and one night in Bangkok (yes, like the song).

After some amazing shrine-seeing downtown, we tried to go see this giant, reclining Buddha, mentioned in all the travel books. A man at the entrance told us it was closed for some sort of holiday. Sporting our plastic bags of soda with a straw (that’s how it was sold from the street vendors), we bemoaned our fate and eventually gained his pity.

He flagged down a tuk-tuk driver, negotiated a ridiculously low fare to escort us around town for the afternoon, and promised that the driver would take us to several exquisite, lesser known shines off the beaten path of the travel books.

Heartened by his kindness and our turn of luck, we headed off, bumping down back alleys in our glorified golf cart, stopping here and there to pop into hidden gems along the way. Sure, we acknowledged and even laughed at our naïve trust in the situation and our driver, but everything was as the benevolent stranger had promised and then some.

Eventually, we stopped at one shrine, where a monk approached us about the history of the temple, moving on to such topics as Bangkok history, politics, and economics. That’s how we landed on the subject of gems, of which Bangkok is famous.

We confided we were interested in shopping for jewelry, though we didn’t know where to start, especially with so little time on our hands. With a spark of shared conspiracy in his eye, he informed us of an “international jewelry expo” currently in progress, available to the public for that day only. Apparently it was the place to pick up jewel deals usually only available to resellers.

He also told us that his temple was known for dispensing luck, which apparently had been our reward for being so friendly and open to new experiences. At our insistence, he gave directions to our waiting driver, and we were off on yet another adventure.

We when we arrived, we were graciously greeted by the staff and treated to refreshing beverages and exotic fruit trays as we waited in the lobby. There, we watched a video about how their gems were found, mined, and collected. Then we received a tour through a studio, where artists diligently worked to cut, polish, and shape the raw pieces into pieces of spectacular beauty.

Finally, we were admitted to the showroom, where case after glistening case stretched out, showcasing diamonds, sapphires, and rubies. The prices were phenomenal, as was the quality of the stones and the workmanship.

After much ogling, we eventually picked a rare green sapphire in an white-gold-and-diamonds ring along with a gorgeous pair of ruby and diamond earrings (which later spurred its own story and cherished gift from Sue).

As a thank you for our purchases, the store owner paid our tuk-tuk driver and insisted we use the company’s chauffeured town car for the night.

Stars in our eyes and feeling like high rollers, we directed the car back to our hotel, where we stored our new treasurers in our room’s safe. We celebrated with a cocktail in the lounge, while our car waited. We were giddy. It was surreal.

For our one night in Bangkok, we decided to have “our driver” take us to a night fair lauded in the travel books. There, we enjoyed an extravaganza of shopping, music, and food—the perfect bow on top of our gift of a day.

And that’s how our night ended: on cloud nine, with luck on our side, treasure in tow, and a great story. 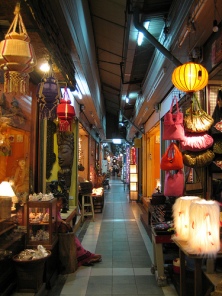 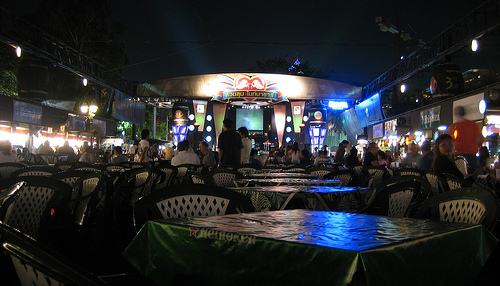 We were engaging in small talk with a couple, the husband of which Ryan loosely knew through work. In the course of the conversation, we discovered that we had all been to Thailand. I commented on how generous and nice its people were, to which the wife replied with disdain, bemoaning Bangkok’s widespread scams on travelers. Apparently the main scam, she told us, involved lying about closed sights and directing people to places to buy jewelry.

Annoyed and flustered, I excused myself from the conversation, playing with the ring I could only assume was from that same scam. Ryan found me and wasn’t a bit shaken by the revelation. His take was that our experience and its outcome remained fantastic, in the truest sense of the word. What did it matter if it wasn’t exactly as we had thought behind the scenes?

Before I could even consider this philosophical leap, of course, I had to verify the validity of the pieces. Were they fake? Quite the contrary. Turns out, they were well beyond the deal that even we had anticipated. A trusted jeweler assessed the quality of the stones and craftsmanship, both of which she found incredible, especially given the price we paid.

So then it came back the question that Ryan had posed. Would I let this outside knowledge (although true) influence our once-in-a-lifetime, storybook day—now part fallacy? Or was it still that day, even with the false concept that led us there?

Years later, I still ponder that, but I’ve settled on the idea that it was all a matter of perspective. All in all, it was a great life lesson. I did not learn to avoid getting into tuk-tuks headed down unknown alleys (as you might expect I should have), but rather to be at peace that it’s nearly impossible to know all sides of a story. However, you can relish in the adventure and wonder of it all.

And that’s what I remember every time I look at my ring, which I still wear every day to this day.

Do you have any dicey travel tales or stories of great adventure? What did you take home with you from that experience… physically or philosophically?

One thought on “One Night in Bangkok”