At age 30, with a great education, a decent job, a loving wife, and a first child on the way, Jia Jiang realized he never chased his dreams because he always chose security over rejection.

He saw himself dying with regrets and told his wife so. Despite being pregnant (when most people would choose security over personal pursuits), his wife encouraged him to take six months to do his own thing.

Four days before his baby was born, he quit his job and put all of his energy into starting his own business. He received many rejections, which he took with a grain of salt. Then a big potential large investment fell through two months before his deadline, which made him question everything.

“Maybe I should take this time to start looking for a job now and have a couple more months salary?” he thought.

His wife was adamant. “I gave you six months,” she said. “I didn’t give you four.”

“Go out and leave no regrets.“

Still hurt and psychologically paralyzed by this latest rejection, he tried a “rejection therapy” game. The idea was: He’d go out looking for rejection by asking crazy requests of people. For example he: 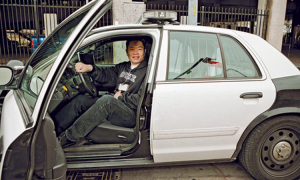 “And here’s the crazy thing: People said yes to all of them! Where I asked for rejection, I did not get it.”

He filmed the process and blogged about it. As a result, people started following him and his cause, telling him their own rejection stories in the process.

“I get to see a lot of stories of rejection, face to face, that not many other people can see… I found rejection is constant, and the higher you go, the more you’ll get rejected… CS Lewis’s manuscript was rejected 800 times before it was published.”

“Rejection is an opinion. Nothing more, nothing less… It says as much about the person giving the rejection as the person receiving it… It’s not an objective truth about who we are. It’s the fear of it that hurts us, so much so that we reject ourselves first, so that others don’t have the opportunity.”

The biggest lesson he learned was: JUST ASK.

What if you don’t ask? What amazing experiences are you missing out on?

“When we put our heart out there, and we get a no, it’s like something is taken out of us. To avoid that negative experience, we just don’t ask. That somehow is a positive. That’s a lie we say to ourselves every day.”

“When you are not going out there getting rejected, you’re rejecting yourself.”

He warns that, if you ignore your own dreams, the world will ignore them, too. But what if we could take the fear of rejection out of the equation. “What kind of world would that be?” Jia asks. ” How many more ideas would be fulfilled?”

You can watch his whole story here.

Try rather than assume you can’t.

One thought on “Rejection: A Love Story”